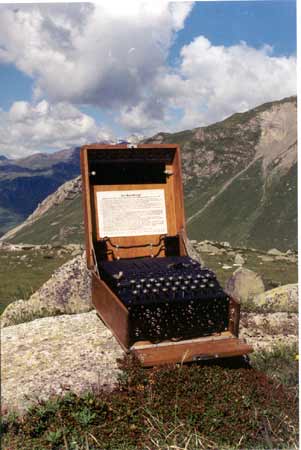 
This year we again reserved 8 tables in the flea market for the display and sale of crypto-related apparatus, spy radios and other items. A huge "ENIGMA" banner flew over the tables so you could see them from across the large hall. There were two huge halls with about 1000 tables displaying equipment for sale so the big "ENIGMA" sign helped people locate our tables. A wide variety of exotic crypto gear, spy radios and other interesting items were on display and on offer. During the four days of the conference a great deal of Crypto gear and many spy radios and other items changed hands and both sellers and buyers came away very happy.


Many of the buyers were members of the Cryptocollectors Email reflector on Yahoo-Groups so they all knew exactly what they were buying and the appropriate values. Many of the sellers were also on the reflector but some spectacular items were also brought to the show by other sellers such as crypto-expert Professor Dr. Franz Pichler of the University of Linz, Austria who brought some very fine early telegraph instruments and some unusual encrypted spy radios, very rare microphones and crypto-related books.


In addition to the buying, selling and networking in the flea market, the Seventh Annual Enigma Forum was held on Friday afternoon at 1600. It was very well attended with a crowd of over 150 people who watched the lectures and the demonstrations and joined in on the discussions.


I do not believe that there has ever been such a broad selection of fine and unusual crypto- gear for sale in one place along with such a gathering of crypto- experts and historians. In my opinion, this conference is a lot more fun than Ebay, the food is better, and you can bargain face-to-face with the sellers. Don't even think of coming without a shopping bag full of Euros or you will be kicking yourself about the things you wanted but could not buy because the sellers only accept Euros.

The excitement of the 2019 meet was greatly enhanced by the unexpected appearance of two never-before seen 3-rotor Enigma machines on a seller's table near the middle of the main hall. News of the appearance of these enigmas traveled by cell phone and walkie-talkie to many of the cryptocollectors and they came running as fast as they could to the table with the Enigmas on display. The first two cryptocollectors to arrive at the table instantly bought the two Enigmas. The sale was made a bit more challenging by the fact that the seller would only accept cash (Euros) for his machines but both of the buyers were able to come up with the required cash to complete the purchase. The Enigmas had been on display for only about 5 minutes before they were both sold.


Below you will find some photographs of the items that were offered for sale as well as pictures of the sellers and buyers and the Forum.

By 0900 on setup day we had put up our Enigma signs over our 8 tables in the flea market and we had begun to put our equipment on our tables. 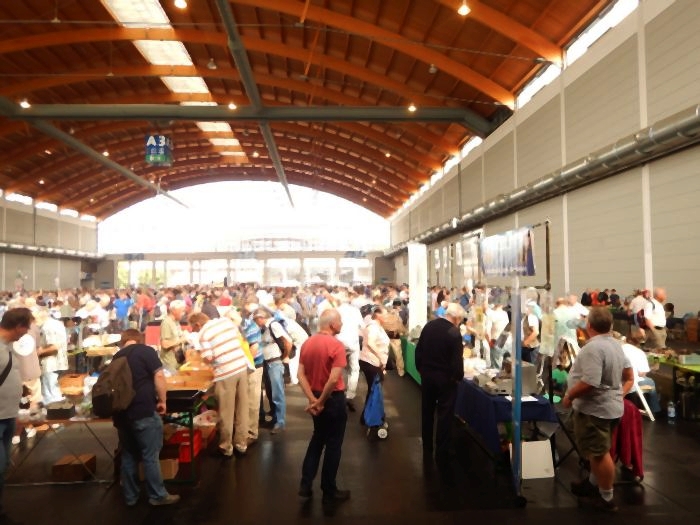 This a photo of one of the two halls enclosing the flea market. There were approximately 500 3-meter-long tables in each hall making a total of about 1000 tables loaded with interesting items for sale.

Another view of our table group as we began to put equipment on the tables.


Suddenly the word went out that there were two Enigmas for sale on a table in the middle of the hall and we all rushed over to see them.

Enigmas and other Cipher Machines

This Ertel Werke Enigma in its Panzerholz case caused a near-riot as people rushed to the table when it was put up for sale. It was sold immediately. The owner had brought it up to perfect working condition and this added to its appeal.

This early 3-rotor Enigma appeared on the same table as the Ertel Werke Enigma. It was sold immediately. The owner had restored it to perfect operating condition and had restored the internal wiring of the rotors.

Another view of the early 3-rotor Enigma.

Another view of the early 3-rotor Enigma.

This rare and unusual early 3-rotor Enigma with original bakelite rotors was available for sale at a price of 190,000 Euros. It was in working condition and the owner demonstrated it and described its features but it did not sell during the show.

Another photograph of the early Enigma with bakelite rotors.

Another photograph of the early Enigma with bakelite rotors.

A photograph of the 3 early bakelite rotors.

An American collector who lives part-time in Germany brought his 3-rotor Enigma to demonstrate and to explain it's operation to the visitors.
He has been considering selling it in the same general price range as the previously described Enigma.

As soon as he opened the top of his Enigma we saw that it contained the dangerous light-green acetate filter. This filter gradually deteriorates over time and off-gasses Acetic Acid.


When the box is closed the filter is directly over the keyboard of the Enigma and the Acetic Acid corrodes the metal rings on the keys. You can see the heavy brown corrosion of the normally bright-silver rings on the keys in this picture.


We quickly convinced him to remove the filter to prevent further damage to his Enigma.


Our web page dealing with this problem is at: https://EnigmaMuseum.com/corrosionalert/

This Enigma made several brief appearances at a vendor's table but it was obvious that the vendor was not really interested in selling it even in the 200,000 Euro price range.
We were not able to get its serial number to add it to David Hamer's list but it appeared to be a very early model in the serial number 600-700 range judging by the filter clips and other features.


This brought the total number of Enigmas on display and possibly for sale to 5.

A nice Swiss NEMA was the only one to show up at the entire meet.


For the first time there were absolutely no FIALKAs or parts for sale this year.

This unusul cipher device was of great interest to the collectors. It's origin is not known.


The pictures show the front and the back of the device.

This unusul code wheel was on display. It's origin is not known.


The pictures show the front and the back of the code wheel.

Although not strictly a cipher device this early Mignon typewriter with additional letter platforms and typewheels looked like a bargain at 280 Euros. It failed to sell during the three days of the show.

Klaus Kopacz set up a vast number of Enigma relics in a glass case. Many had been dug up from battlefields or retrieved from lakes in Germany. He was constantly surrounded by visitors asking questions and asking him to demonstrate and explain the Enigma he had on display.


In this picture he is describing the details of a bakelite rotor to Glen Miranker.

Dr. Mark Baldwin (Dr. Enigma) the noted author and lecturer and his wife came to the show for the first time. Here Dan Perera is telling them what kinds of things to expect as they explore the exhibits.

Tom and Dan Perera were asked to do a "Book Signing" for the new second edition of their book: "Inside Enigma" by their publisher, The Radio Society of Great Britain.


In this photo Tom and his publisher/editor Mark Allgar are seen at the book signing.


Here is a link to the description of the Second Edition of their book: https://EnigmaMuseum.com/iead.htm

John Alexander brought along a very unusual display of equipment this year. It included a rocket ship and...

This is one of the very wide frequency range surveillance receivers mounted in a plain suitcase that Paul Reuvers and Marc Simons brought along to enhance their talk on hidden CIA microphones in the Enigma Forum.

This picture shows Paul Reuvers checking out one of his hidden microphone (bug) detecting receivers in preparation for his talk at the Enigma Forum.

Each evening we went to LukLum Restaurant for beer and very strange desserts.

The Restoration of Enigma A16878 by Dan Perera.

The Evolution of the Enigma Steckerboard by Paul Reuvers and Marc Simons.

Much of the information in their talks may be seen on their website: http://cryptomuseum.com

Dan Perera showing the restoration of Enigma A16878.
You may view the entire restoration process at:
http://enigmamuseum.com/the-restoration-of-enigma-a16878

There were many questions, answers and demonstrations after the Forum talks ended. Here Marc Simons demonstrates one of the tiny hidden CIA microphones.

Klaus Schmeh (Left) answers questions from a member of the audience.

Klaus Kopacz explains and demonstrates aspects of Enigma technology to members of the audience.


COPYRIGHT NOTICE: (Copyright (c) 2019: Prof. Tom Perera Ph. D.)
Although all the pictures and text are copyrighted, you may use any of them for your own personal applications including public lectures and demonstrations, publications and websites as long as you mention the www.EnigmaMuseum.com. If you plan to offer them for sale to the public in any form, you must email me for permission which I will generally grant as long as you mention http://EnigmaMuseum.com. My email address is given above. Some of the material may require contacting other copyright owners for commercial use and I will inform you by email if this is the case. Please also see the disclaimer of warranty.